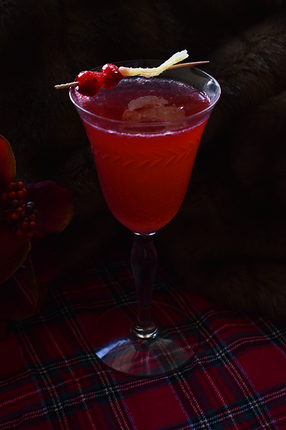 Back when the pandemic started, a video of Ina Garten mixing a giant Cosmo made its way across the internet. In it, the loveable Queen of the Hamptons™ pours an entire bottle of vodka into a pitcher and says blithly, “ nobody’s stopping by!”

It was an instant hit. And in my mind, that was the moment the much-maligned Cosmo was reborn.

The Cosmopolitan hit an all-time high of popularity in the late 90s/early 2000s, a time of bell-bottoms, frosted lip gloss, Paris Hilton in sparkly club halter tops, and of hiding alcohol behind a cloak of chemical-tasting fruit juice.

But if you break it down, it’s really a delicious cocktail and one that’s perfect for the Holiday season. This version takes the basic combo of lime juice, triple sec, vodka and cran, and subs in a shot of cranberry-ginger syrup and splash of ginger beer for a slightly spicy, extra cran-punch.

Combine ingredients in cocktail shaker with ice. Shake for 10 seconds, then strain into a martini glass. Top with a splash of gingerbeer if desired. Garnish with candied ginger and candied cranberries (leftover from making the syrup) on a toothpick.

1 three-inch knob of ginger, bashed with the flat side of a knife